Part Fifty The Monkham inlet is situated directly south of Monkham Wood and is marked on the 1844 tithe map of Hollington, drawn by David Padgham, as part of Piglands Brook.(137) It is divided into three separate areas (A) the upper enclosure, (B) the beach area and (C) the harbour, separated from the marsh by reed bed (D). These are marked on the plan below. 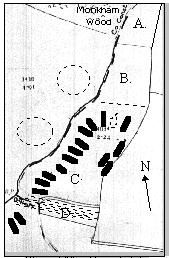 Plan of Monkham Inlet
The first area (A) can be approached from Monkham Wood walking south through the wood. There is a wide uneven stream towards the southern end of the wood, which rapidly disappears underground as soon as it enters the open inlet. This area is flat, with a steep eastern side, which was probably a sheer cliff at some stage in the past. It shows signs of collapse and has been covered with earth, forming the jetties, which we discussed earlier, at the lower levels.

Picture of jetty running into inlet looking south from Monkham Wood
The inlet is approximately 20 feet below the top field level, on the eastern side, where the Norman camp is situated. Thus ensuring no possible attack could be mounted from this side once the landing had been completed and the fort built. 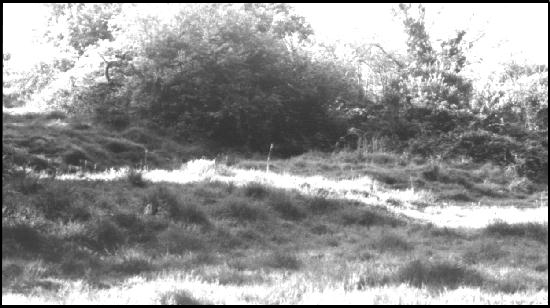 View of terraces which form the jetty on eastern side of inlet from position (A).
The top section of the inlet nearest the wood is flat in the valley section, but very wet most of the year. It is separated from the beach area (B) by a hedge approximately a quarter of the way down towards the marsh. 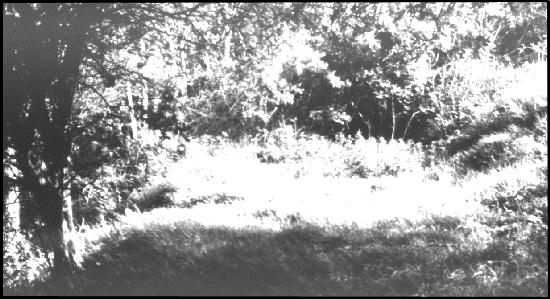 View of terrace above lower jetty approximately half way along inlet.
As you pass through the hedge you become aware of a beach section in front of you, together with the remarkable beauty of this totally isolated site. Until now I have confined myself to mostly factual matters. However it needs to be said that the inlet is a very special place. It has in fact been designated a SSSI, Site of Special Scientific Interest, because of the flora and fauna of the area, along with the marsh. Once you are in the inlet no civilisation can be seen or heard and it is true to say that the integrity of the site has been maintained, either by design or accident, since the days of the landing. The view is of what was once a beach, opening on to the marsh, which itself was once open water. In the front of the marsh, where the harbour area (C) meets the marsh (D) the reeds hide an irrigation ditch cutting across the inlet in front of an earthen bank. This earthen bank cannot be seen from the beach area because the reeds, which are some eight to ten feet tall in places, totally obscure the front of the marsh and appear to go right back into it, if viewed from the beach.

View of the inlet looking south towards the marsh. The hill in the distance hides the sea.
On the eastern side of the inlet the earthen terraces are very obviously man made, in that a series of three earthen terraces run along the northern section, from about half way connecting the upper and lower levels. These are only evident in certain areas where the undergrowth has been cleared. 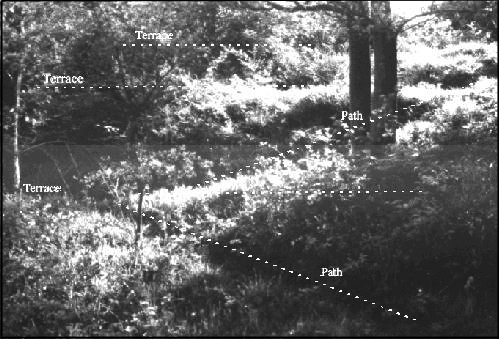 View of three terraces with paths connecting
The Beach area (B) is now covered with water resistant grassland and large numbers of termite mounds, consistent with pastureland that has remained virgin for centuries. The eastern side of the inlet seems to be wetter, with grasses that thrive in wetlands. There is a well defined beach line, marked by the dotted line on the picture above, which sweeps across the inlet forming a small bay. At this point the floor level drops by at least half a meter. During the Winter months area (C) is virtually impassable due to it being positioned at the water table level. The slightest rain turning the whole area into a lake. A drainage ditch has been cut across the front of the inlet and cuts through the reeds at the front on the right hand side (looking south).

Dowsing in the beach area produced a response to three Norman boats drawn up along the front of the beach. To my surprise the centre boat responded to the name Mora. Further investigation in the harbour area revealed at least nine similar boats along the western shore of area (C) and at least three in the central area. The boats of the western shore were drawn on to the beach with between two and three meters between them, in a roughly parallel formation. Interestingly the boats on the other side of the inlet (the eastern side) were all parallel to the shore. Subsequent investigation by Simon Jennings and Christine Smyth of the Archaeology Department of the University of London confirmed to me that this inlet appeared to have a deep water berth on the eastern side and a shallow shelving hard core beach on the western side. This would account for the different positions of these boats.

According to the dowsing, the inlet is packed with boats which may have a Norman origin. These vary from three to five meters in length and average one to one point five meters wide. In many respect similar in size to a small lifeboat. The fact that no Invasion boats have ever been found and I am making the claim that this remote inlet less than a mile from Hastings town contains at least a dozen, is remarkable.

The Mora, was given to William by his loving wife Matilde,(138) and was said to contain a statue of a boy cast in bronze at the bow. This is shown in the Bayeux tapestry(139) with a trumpet at the mouth. Dowsing for the bronze boy produced a site dead centre of the inlet, marked as a boat shaped dotted line on the plan on page 134. Regardless of the reader’s belief in dowsing, logic dictates that if the hypothesis that the site of William the Conqueror’s camp is next to the Wilting inlet, then it would more than likely be true that the Mora was beached in the inlet. The landing was in an age when leaders still took there position at the front of their army. In Wace he reports:

As the ships were drawn ashore, the duke first landed, he fell by chance upon his two hands. Forthwith all raised a loud cry of distress, “An evil sign,” said they, “is here.” But he cried out lustily, “See, seignors, by the splendour of God! I have seized England with my two hands..”

If this is the place where William stepped ashore and promptly fell in the mud, then it is highly logical that William’s boat would be at the centre of this inlet. He is reported to have stepped ashore first, which would indicate a prominent position for the boat. According to the Battle Abbey Chronicle the boats were soon destroyed after they landed,(140) however the site of the boat would still remain and thus the dowsing for the site should remain true. This sounds like I might be offering a rather lame excuse for finding the site of a boat, but hedging my bets in case it is later found that there is nothing there more than a pile of cinders. This is not the case, the boats in question are most certainly there. If I did not believe this I would not have spent so many years investigating what appears till now to have been a historical myth. There is no validity in providing evidence unless it can be shown to exist.