Part Fifty-one It is important that I do not lose my academic audience here, regardless of the thought structures that may exist in “New Age” philanthropists, since my quest is not to mock science, but simply to endorse what is provable. I would therefore respectfully ask those who find difficulty with “dowsing” to reserve judgement until after the outcome of any scientific investigation of the facts put before you. It might seem to stretch the imagination too far to claim that the Mora is now sitting on a beach in Monkham Inlet as a result of dowsing. It might even be more difficult to take on board when I report that there is evidence of burnt wood at that site. Thus confirming the possibility that the Chronicle of Battle Abbey may be correct, in that William burnt his own boat to ensure total allegiance by all concerned.

However the iron fittings in the boats did not burn. In consequence the convenient excuse that nothing remains does not hold true in these circumstances. If the Mora is situated in the centre of Monkham inlet, as I believe to be true, evidence must exist at that site, because the boat must contain iron and possibly bronze parts. Those parts will exist as a signature in the soil, even if the molecules have long since migrated to be replaced by phosphates.

I therefore decided that an exploratory archaeological investigation was in order to establish whether there was any scientific validity in this claim, or whether the dowsing was scientific “hogwash”. I conducted an elementary surface clearance, removing the top six to nine inches of soil. Immediately a pattern appeared, which bore no relation to any other subject that I had ever seen. 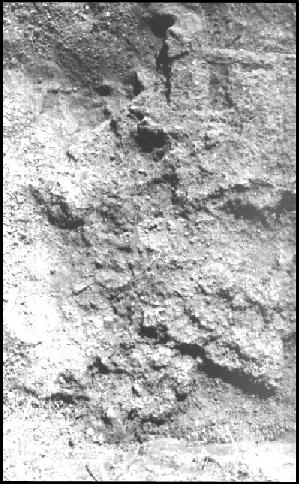 Boat parts revealed at the site of the Mora 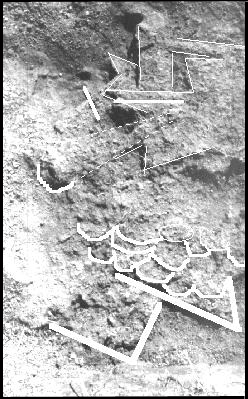 I was surprised to find something so close to the surface. However digging further into the inlet revealed that the grey sediment layer of river mud is only just below the surface in some areas. The geomorphology of the inlet appears to have caused the top layers, which would normally have collected over the centuries, to move.

The picture above shows what I have called boat parts for the Mora, since this is what I dowsed for. The image that was revealed in the soil after two weeks of very slow clearance was of no assistance to me, other than to prove to me that something from ancient history is there. The parts are metal in origin, but now completely replaced, making handling or removal impossible. They consisted of struts, flanges and overlapping sections which clearly could be anything nautical or otherwise. Needless to say expert evaluation is required. I believe it possible that the image above is connected with the rear of the boat and may have been fixed to the stern.