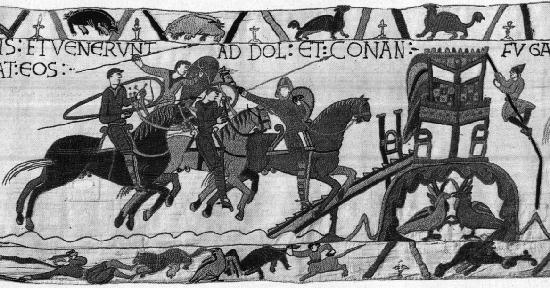 At Dol the Normans are shown attacking Conan's stronghold. Here again the terrain shows a hill with a fortification on top. Either side there is a mound with a view of a moat or defensive earthworks, with Conan escaping via a rope over the ravine, whilst the Normans attack on the side with a drawbridge. Two dove like birds are positioned in front of the mound to symbolise a peaceful surrender. The scene is correct in all detail including the barricading of the castle entrance with shields.(68) 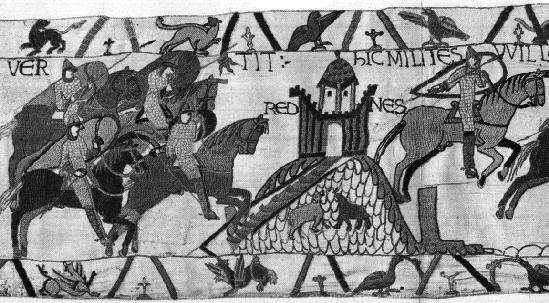 Next Rennes is shown as a central tower at the top of a hill surrounded by a palisade. Here again two mounds are shown but this time in a completely different style indicating a much steeper and difficult defence. This appears to be man made rather than a natural feature. The entrance is also shown in a way that indicates a rampart with animals beneath. It has been suggested that these are sheep grazing. It is my view that the style of the tapestry suggests that the uniform ringlets in the area below the castle are the artists way of indicating a regular man made fortification, whilst the previous hills each have definitive geographical differences in their portrayal.