I believe it can be shown that the author of this work was just as careful when drawing the buildings and the terrain. The first plate we turn to PLATE 1 concerns the funeral of King Edward, where the body is taken to Westminster Abbey. Here is portrayed a building that closely resembles the known building of the time. Recent discoveries in the foundations at the Abbey confirm that the original building was indeed as large as portrayed, closely resembling the image on the tapestry. 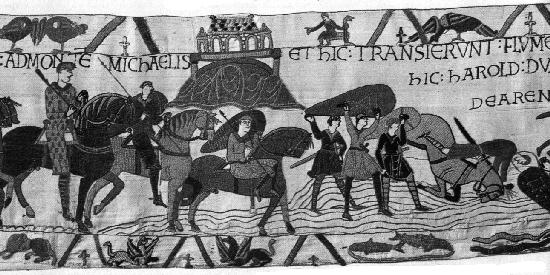 Earlier Mont Saint Michel monastery is shown on an uncultivated hill, at the top of the tapestry, whilst the estuary is clearly shown in the foreground.