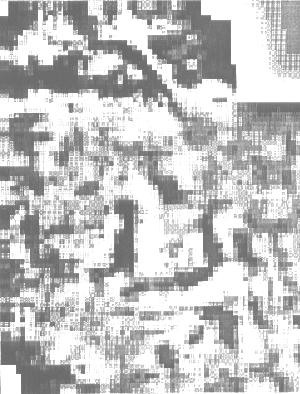 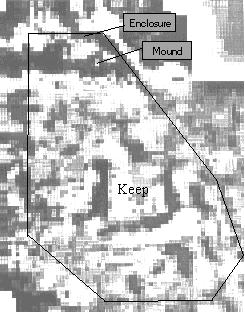 The resulting plot produces confirmation that the northern end of the Norman fort appears to have an enclosure of very high resistivity. This suggests that masonry or a stone structure of some kind is hidden beneath the surface. The mound shows in the centre of the area of high resistivity confirming my earlier belief that a retaining wall is holding back the soil that has moved down the slope. Alternatively it may be stones arranged in a circle, as indicated by the contour of the mound.

The advantage of processing smaller areas of data can be seen from the results shown above. Instead of the grey scale being washed out greater detail can be seen across the smaller area. This detail shows in particular along the left hand boundary but is not conclusive. A further wall may be hidden to the left of the Keep, but without expert interpretation I cannot be certain that it is not just a natural phenomena.

What is certain is that the Norman fort area holds many mysteries still to be revealed. The resistivity survey confirms ditches and buildings common to occupation by man in an area that has previously been devoid of any reported activity since the Domesday Book was written. The outer ditches confirm the probability that this was at some stage an Iron Age hill fort, which has subsequently been altered. The resistivity survey confirms the existence of the Roman tracks running across the site and under the perimeter walls. This indicates that the perimeter itself must have been built after the Roman occupation, confirming the probability that this is indeed the first Norman camp. Whilst the possibility exists that this might be Saxon I have little doubt that the absence of the normal circular features associated with Saxon towns of the period makes this highly unlikely.

The central building comes as the biggest surprise of all. No-one could have guessed it’s existence from a visual survey. This feature is the hallmark of all Norman defensive thinking - the Keep. Later developed into stone structures, designed to intimidate the nation into submission. If correct it would come as no surprise to historians to find that William built one at his first camp on the shores of Hastings port. The big surprise is that if correct it has been found after nearly a thousand years.