Part Thirty The evidence for population during this period takes the form of Bronze age scrapers spread over an extensive area, together with burnt and worked flints dating through to the Iron Age (Figure A3/4 Fields 841/2 on page 88). The report prepared by the Oxford Archaeology Unit during November 1992 was commissioned by Chris Blandford Associates on behalf of the Department of Transport. It states(114):

ōA brief assessment noted the presence of late Neolithic and early bronze age elements, a date which is reasonable for the assemblage as a wholeö . 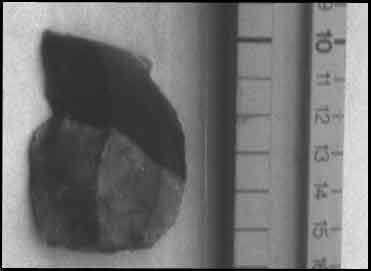 This is expanded to support Iron Age activity in relation to the burnt flints found on part of the site in question. Here the report confirms the existence of industrial activities:

Thirty pieces of fire-cracked flint were recovered from the field survey. Such material, being the by-product of direct and prolonged heat, such as produced by a kiln, furnace or bonfire and not from more general activities such as stubble burning, is a good indicator of past settlement or industrial activities, especially, in the latter case, when it is associated with slag or other metallurgical waste products (115)ö

As well as flints the team conducting the field survey found tiles and bricks where:

ōA few pieces may be assigned a Roman date on the basis of their fabric.ö

Thus supporting the proposal that having developed as a Bronze and Iron Age centre of civilisation the Romans used the port as part of the continuous occupation. This led to the growth of Hastings into the leading port in the south-east and subsequently the lead Cinque port.

It is noted in the report that:

ōNone of the slag retrieved was blast furnace slag which has a glassy appearance and was produced after 1496.(116)

The consequence of this observation being that the huge amounts of slag found on the Wilting site supports the possibility of a major industrialised area, where the origins have yet to be identified, but are dateable prior to 1496.(117)

The report in question only covered the area in immediate contact with the proposed new road and therefore represents only a small part of the over all site. The author does not beat about the bush in the Summary and directly confirms

ōWhen these results are considered with the data gained from the desktop survey and other field evaluations, they point to possible archaeological features which require further investigation (118)ö

This should confirm to those who remain sceptical that there is something worthy of investigation at the Wilting site. Even if the reader is not yet convinced of any Norman involvement it must be noted that the archaeological survey conducted by the Department of Transport covered the complete route of the new road. Over the whole route there are no sites that the survey unit considered worthy of comment with the sole exception of evidence at Wilting manor (119). It is not in my opinion a coincidence but solid archaeological confirmation of the importance of the site.

As part of the consultation document in connection with the proposed road the Department of Transport conducted a geophysical survey of the route. However the plans that have been prepared have failed to include the part of the route (120) that we are interested in, omitting the area concerned completely. This is in my view an almost criminal over-sight, since they are the only fields on the complete survey which have been indicated in separate studies to have possible archaeological remains.(121) The legal ramifications of publishing the report with incomplete documentation remains to be seen. I would have thought that publishing a route map with incomplete documentation could possible be illegal and in any event against the public interest.

Further evidence of Iron and Bronze Age inhabitation are found in the immediate port area, in field number 5143 of 4.1 acres. This takes the form of a circular settlement shown bellow 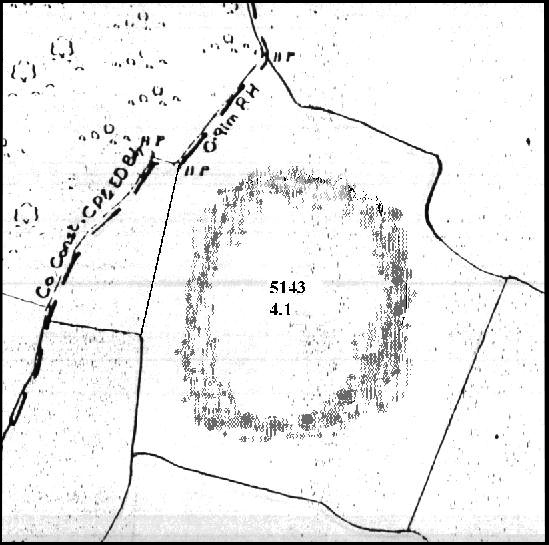 Evidence to support this takes the form of a resistivity survey conducted during the Summer of 1992/3 by myself and a colleague. The results of this survey is published on pages 126 -133 . This shows the characteristic light and dark areas of ditches consistent with earthworks of the period. Visual examination of the area of hill on which this is found confirms a likely Iron Age settlement by the outline of a circular settlement. Large circles in adjacent fields (shown on aerial photographs (122)) also confirm this opinion. Proper evaluation of this site and those adjacent fields is required by appropriate authorities on the period in question.