Part Twenty-nine We have seen from the first maps of Hastings, Christopher Saxon 1589 and John Speede 1610, that little can be gleaned as to where Hastings might have been located as early as 1066. Even though these two maps are recognised as inaccurate, they do throw a little light on the question of where the original port was located.

When Dawson examined the historical record of the castle in 1909 he explored the issues relating to tidal drift and the viability of the site of the current cricket ground as a port.(109)In these records he noted a number of anomalies in relation to the maps, including the mysterious island shown south-east of Hastings in the l610 version.(110)

I believe there is a logical explanation for this island, which can be explained in relation to the events of the 13th century. Up until that time it is my contention that Bulverhythe was the main port of Hastings. I believe it is for this reason that Saxton places the ôHastingsö title level with the left hand river of the three rivers at Hastings. The same process is carried out at Pevensey Haven. However on the Speede map, only twenty years later, the island appears to the south-east whilst Bulverhythe is drawn to the west showing a large inland lagoon, in the shape of an inverted boot.

This is clearly a mistake, as the third river (A), and the lagoon with tributary running East (B) are one and the same. In fact the lagoon exactly matches the shape of the harbour and entrance at Bulverhythe. It is marked on the map as Bulverhythe and therefore must be the third river, of the three, not the fourth as marked since there are only three in this area. The fact that the tributary running off the lagoon follows the same route as the Hollington - Crowhurst stream confirms that these two rivers have been duplicated and the lagoon should really have been drawn where that river is drawn.

The answer as to why an island is shown does not lie in any mysterious sandbank which has subsequently been washed away, since it is still clearly visible today. In the 13th century the headland West of Bulverhythe was reduced by marine erosion. This caused shingle to move across the Bulverhythe entrance. Eventually the Bulverhythe port entrance was closed, as the authorities lost the battle and will to keep it open. Once closed the water backed up along the Combe Haven valley forming the marsh that has developed into the wetlands that are there today. However in the meantime the river found a way out to the sea through the Eastern entrance that now forms the exit for the Combe Haven stream. It is my proposal that at some stage, possibly between the years 1598 and 1610 both the Eastern and Western entrances to the Combe Haven valley(marked E and F on the plan on the following page) could have been open. In consequence any sailor of the day navigating along the coast would have recognised this entrance as having an island situated exactly where indicated on the Speede map, between the third and fourth entrance travelling west past Hastings.

Once this sequence of events is understood and a physical examination of the coast at this point is undertaken, there is no need to explain the map in terms of eroded coastline, with mysterious islands long since lost to the sea. Anyone living on the coast road between Glynne Gap and West Marina at Harley Shute knows that the land under them was once an island. It is indeed incredible to believe that historians have never recognised this in relation to the Speede map. 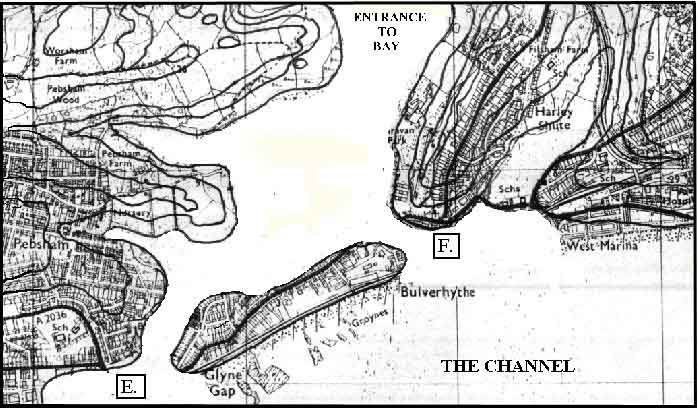 I bring this matter to the attention of the reader, not because it plays any major part in verifying the site of the old Hastings port, but to show how historians often work with paper and in so doing do not have the experience of living on the land about which they write. Sometimes the answer may be plain to see by those who live in the area, yet it will remain an historical mystery simply because the research is carried out in books, rather than on the ground itself. This particular example shows how facts are muddied to suit the evidence. Since no island is recorded on the official record it is claimed the island must have been eroded by the sea (111)(an argument also used about Hastings port). Although there is no evidence to support this claim later manuscripts contain the same conclusion without ever re-examining the case. It is upon exactly this premise that Hastings has developed a fictitious port below the castle. It was in fact at Bulverhythe all the time, but because it did not suit the historians of the day to look outside of the castle valley, the old port has never before been located.

I shall now identify the location of the original port of Hastings, together with the historical infrastructure that in turn supports the case for listing the complete site as a national monument.

Having discussed in some detail the reasons, both historical and theoretical why the site of the port of Hastings was located on the Bulverhythe. It is now necessary to identify the pertinent features that still remain, together with those elements that can be identified as those connected with the immense amount of history concerning the port and the Norman Invasion in particular. These are each limited in their individual element by the large amount of time which has passed. However modern archaeology will be able to confirm these finds, provided the necessary expertise is available, together with an adequate investment in human resources and the technology required to preserve any artefacts that may still exist.

The site of the old port of Hastings is located on the northern shore of the Combe Haven valley at Ordnance Survey site TQ 778103 adjacent to Redgeland Wood (Marked A on the plan below) opposite the old entrance to the Combe Haven valley. The site of the wooden castle pre 1094 is immediately next to this, overlooking the harbour and entrance to the sea, on the TQ 61/71 1:25,000 Survey map. 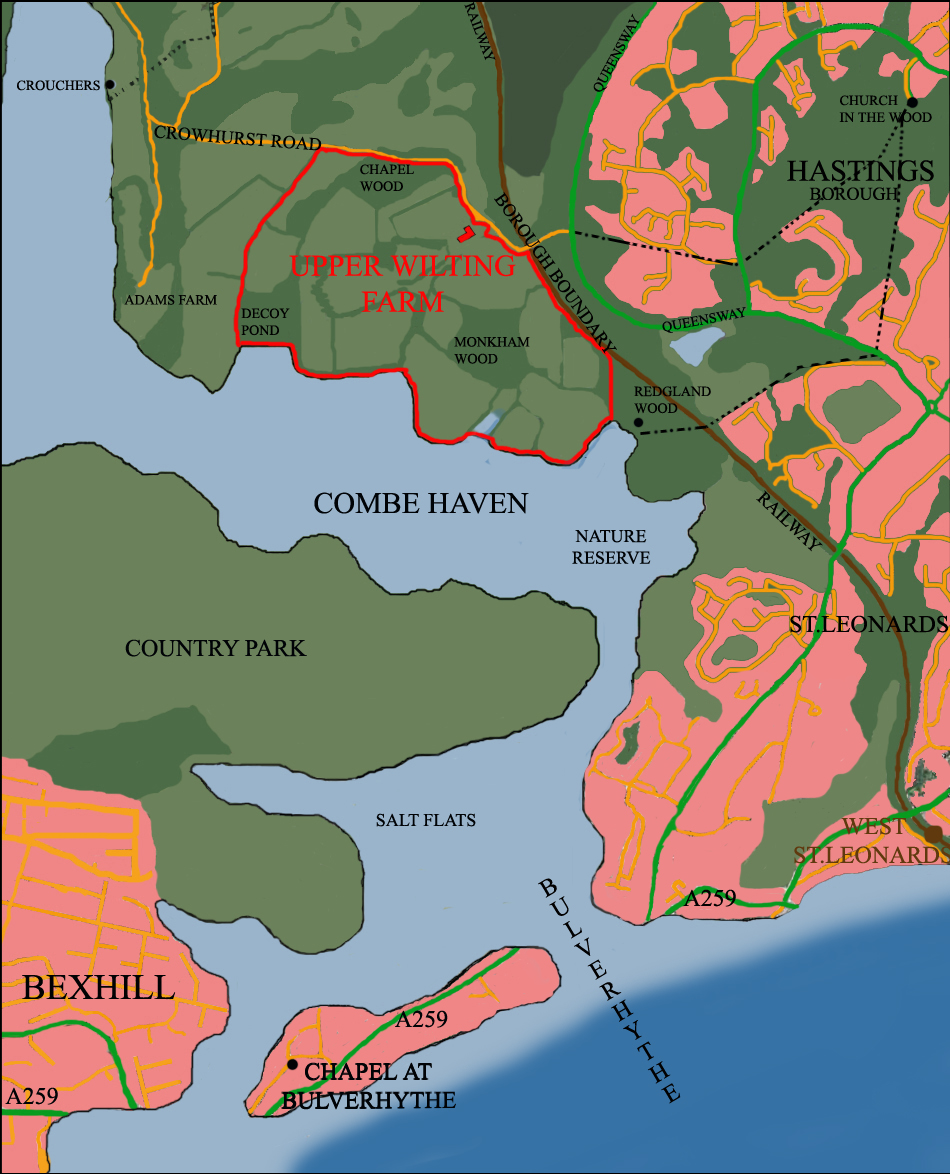 Map of Wilting showing line of proposed bypass
The Invasion site occupies the whole of what was known at the time as Wilting manor, substantiating the Domesday evidence previously examined. This consists of some 200 acres of land on the north side of the valley between TQ 767106 at Decoy Pond (to the West), along the flood plain to the port at TQ778103(to the East), and North as far as Chapel Wood located at TQ 771111.

The whole 200 acres is one very large hill, exactly as described in the documents that we have examined, rising from sea level by the shore, to a peak at almost 140 feet, occupying a brilliantly strategic position overlooking the main London to Hastings road (112) of the time , adjacent to the manor house. This road ran along what developed into the old coach road running from Wilting, through Crowhurst, up to Telham Hill and on to Robertsbridge and London via Battle.

The manor of Wilting has a continuous recorded history as an agricultural site that goes as far back as far as Domesday. Indeed it will come as no surprise to find that the first sheriffs of Hastings, appointed by Williamĺs first landlord the Count of Eu, were installed at Wilting Manor.(113) This is not a mere coincidence, but an indication of the importance of the site. Given that Wilting is recorded in Domesday as the second most wasted manor 20 years after the Invasion, by virtue of itĺs poor recovery, why would the first sheriffs of Hastings be located there unless there was a very good reason? In terms of travel in those days, Wilting was by comparison well removed from the ônew burgö of the Bourne Valley. I propose that it was because the Normans were based at Wilting in the early years following the Conquest, because it was a natural inheritance for the first sheriffs to occupy the same manor house.

This site is currently designated as part of the line order for the A259 Bexhill and Hastings Western Bypass. The effects of this line order can be seen in Document Reference 29 Sheet 7 /8 (Section C/D) reference 10059/RC/046/A and is shown as a heavy dark line on the map on the previous page. Put into laymanĺs terms the new proposed bypass will totally destroy the integrity of this site and would represent a national archaeological disaster, unparalleled in the history of this county.

To build a road through one of the greatest historical and archaeological treasures of the land, when it has remained hidden for nearly a millennium, at a time when it has only just been discovered, would amount to a monstrous act that the public would never accept. Any civil servant or politician in receipt of this knowledge who approved such an act, without first qualifying every aspect of the claims I lay before you, would be a very brave man indeed. Bearing this in mind I propose that we look at the archaeological evidence.

What we find at the old Hastings port, at Bulverhythe, is a continuous archaeological record dating back to the Bronze Age, when civilisation first started in the Combe Haven valley. This evidence supports the proposal that the site in question was a unique centre for civilisation in the area. There existed an infrastructure which developed into the Saxon port, which William subsequently took by force.