Here you can see that we are looking East along the line of the irrigation ditch, which has been cut in a slight "S" shape along the line of the previous ditch. Clearly the engineers involved could not establish the line of the original ditch exactly, because it had been filled in over the years with silt and in any event making the ditch straight was of no immediate importance from their point of view.

Almost dead centre of the photograph what looks like an exposed log can be seen. However it appears to have a flat upper side and although there were some teeth cuts from the excavator used, had all the appearance from a distance of a large oak beam.

The beam appeared to be half buried across the width of the excavation of the ditch. The distance from the water level to the top of the bank was 1.3 meters and it was not possible to tell how deep the beam was because it sat in sediment which was running water. The temperature of the water at this time of year is just above freezing so at this time we don't know whether this beam is rectangular or not. Further excavation in the Summer should enable us to look at that.

First impressions were that this was oak, waterlogged, since it would have been below water level most of its existence and made a fine bridge across what now was an impassable ditch. 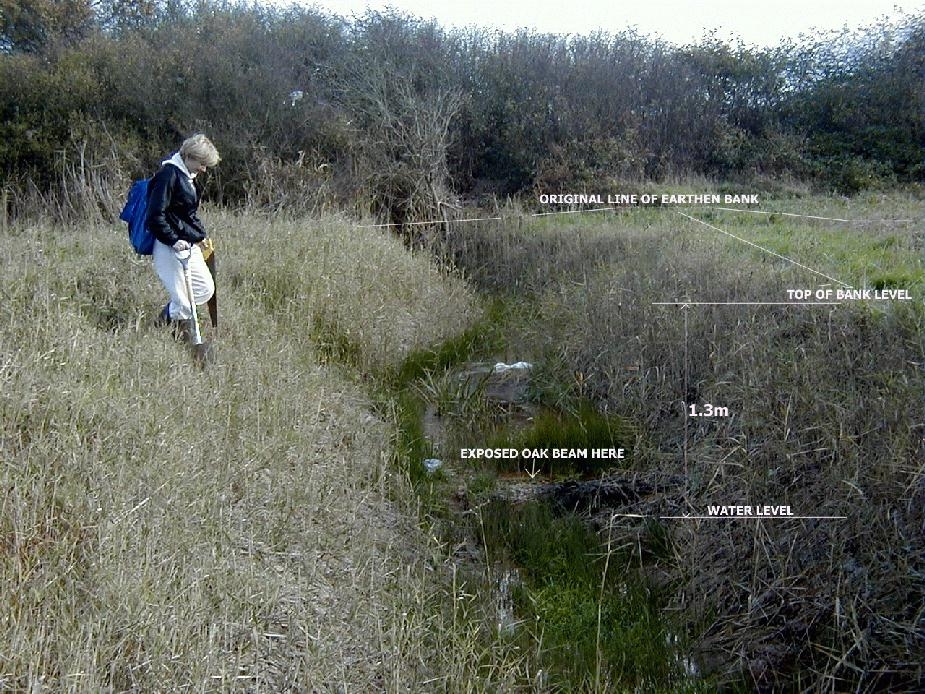 Looking in the opposite direction along the same ditch to the west you can see the position of the beam immediately in front of a plank, which I bought with me, with a view to using it to stand upon during excavation.

You can see from this photograph that the beam is located in front of the plank. I have positioned the plank at right angles to the ditch. The beam can be seen to run at an angle of about 10 degrees to the horizontal, rising on the left hand side as you look at the photo. It also runs off square by about 40 degrees towards the camera on the right hand side. 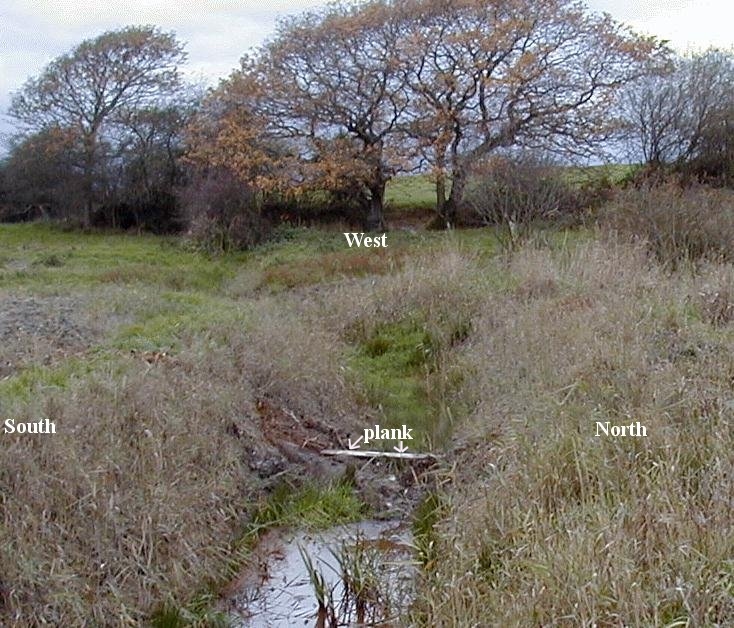 This next photograph shows the view from the same side but closer and after several hours excavation. It is noticeable that the top side of this beam is relatively flat and appears man made. The silt level in the bank can be seen quite clearly on the left hand side of the bank. Close inspection shows that the end of the beam where it rises into the bank is under the grey silt level. This suggests that the beam was placed there or somehow drifted there prior to 1300 when the inlet ceased to be tidal since the grey sludge although it looks like clay most probably is fine silt.

The end that I exposed to the north, being the side furthest away from the sea and landward side, had two spurs (marker D and F on the photograph). At point C (also marked on the photograph) is a clear axe cut! An axe cut that was below the water line. 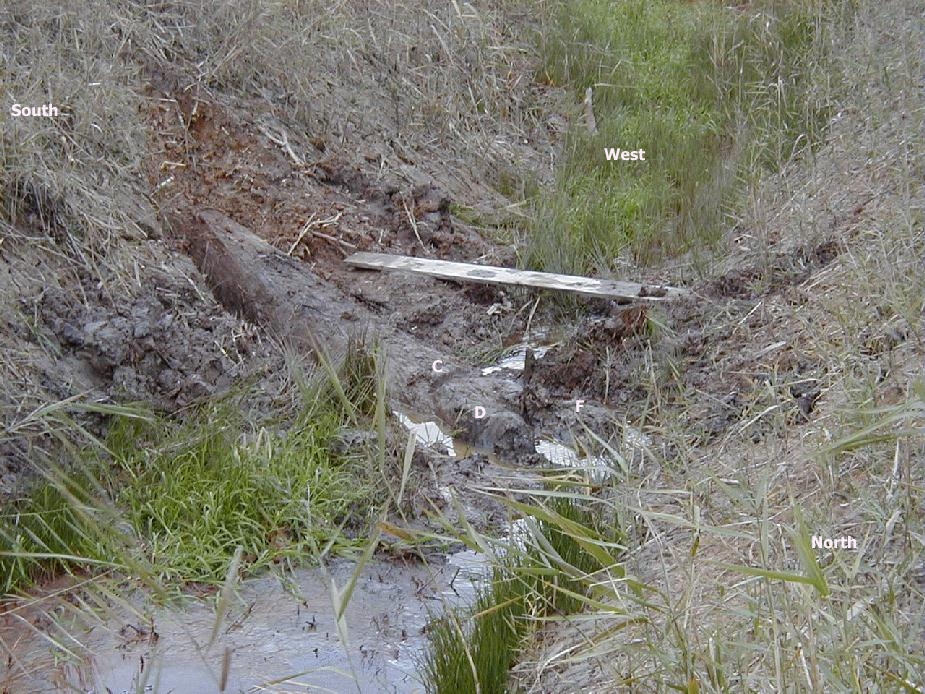 Here is a better view looking north along the beam. Clearly show the flat upper side which rises into the bank on which I am standing to take the photograph. I have to tell you that this work was done in early December 1999 and this site is about as mucky as you can get. It is wet, being at marsh level and smells of ancient peat - since the peat level of the underlying marsh adjacent to this site is almost exposed under the area where the excavator has removed the bottom of the ditch in places.

The water itself is alkali and when you get home to clean up you feel like several layers of skin have been removed - which they have by the chemical reaction. None the less this beam is one of the most interesting things to have been found, because it may be important in establishing what this earthen structure is. The cut can also be clearly seen. 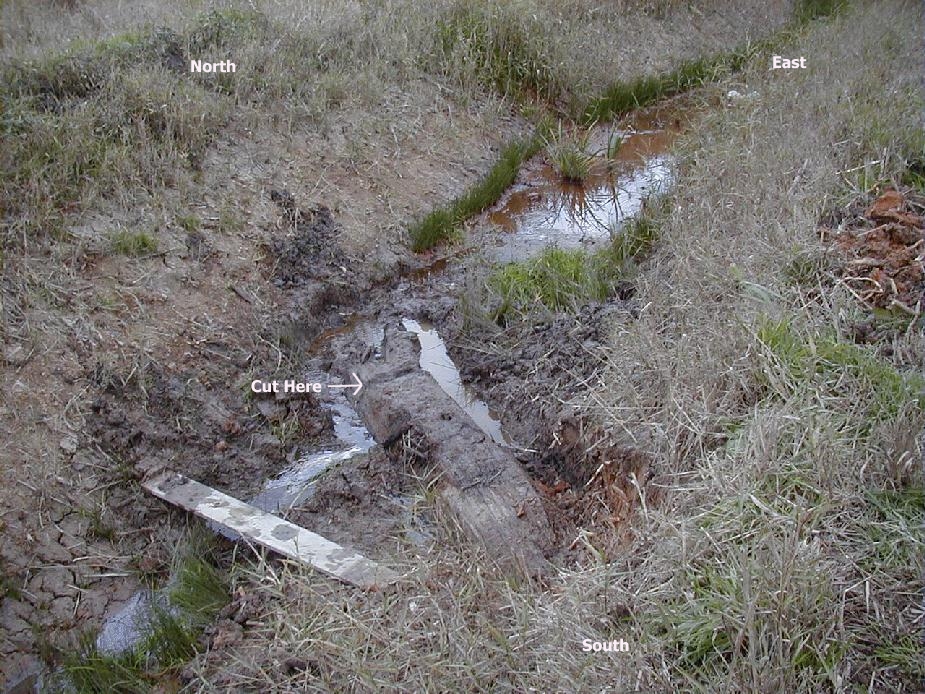 Here we have a nice mid close up picture of the beam looking east from the plank at the point where it enters the water. The water is slowly flowing east to west. 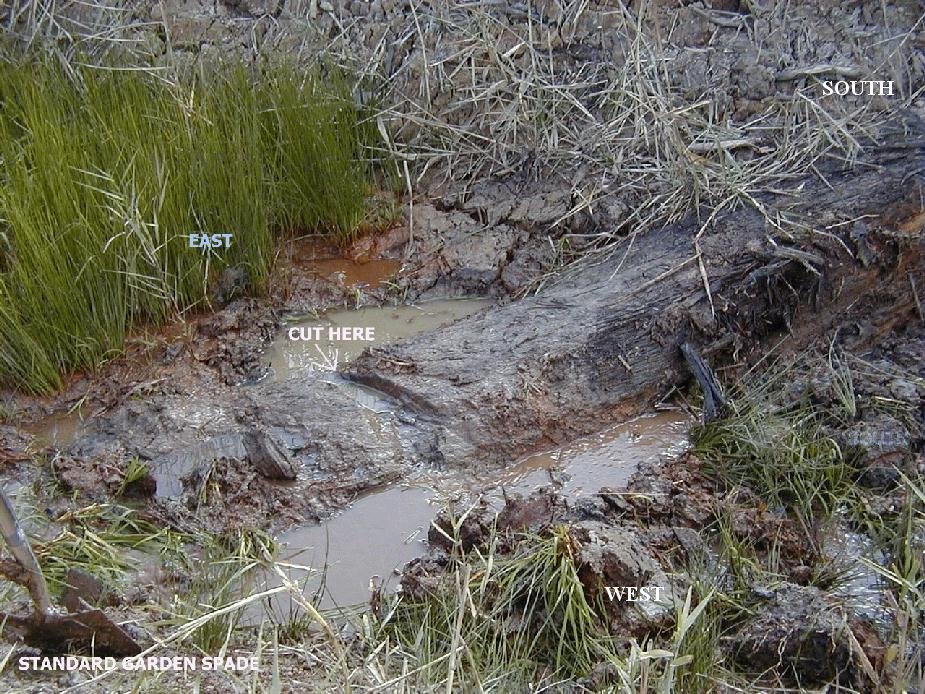 The cut shows clear axe marks and the wood from the beam appears to be black and coal like in structure - as if it has been impregnated with something - the sort of fossilisation process you would expect if the beam were found in a fossilised forest. Yet the end rising to the south is clearly in good shape and has all the appearance of being cut down in the last few years - something that from its position is quite impossible.

There now follow three close ups of the cut and the north end of the beam which appears to be shaped for some purpose. 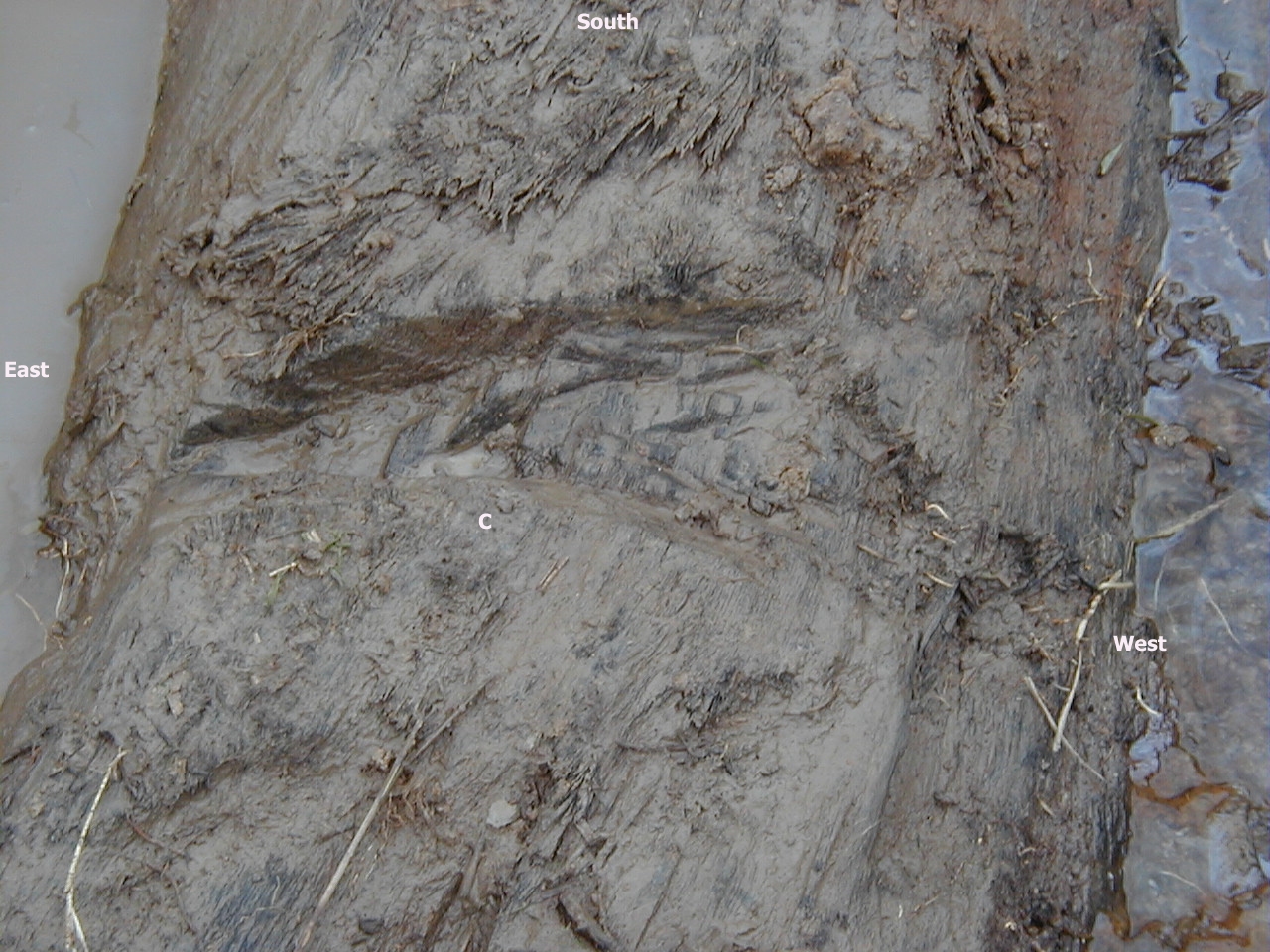 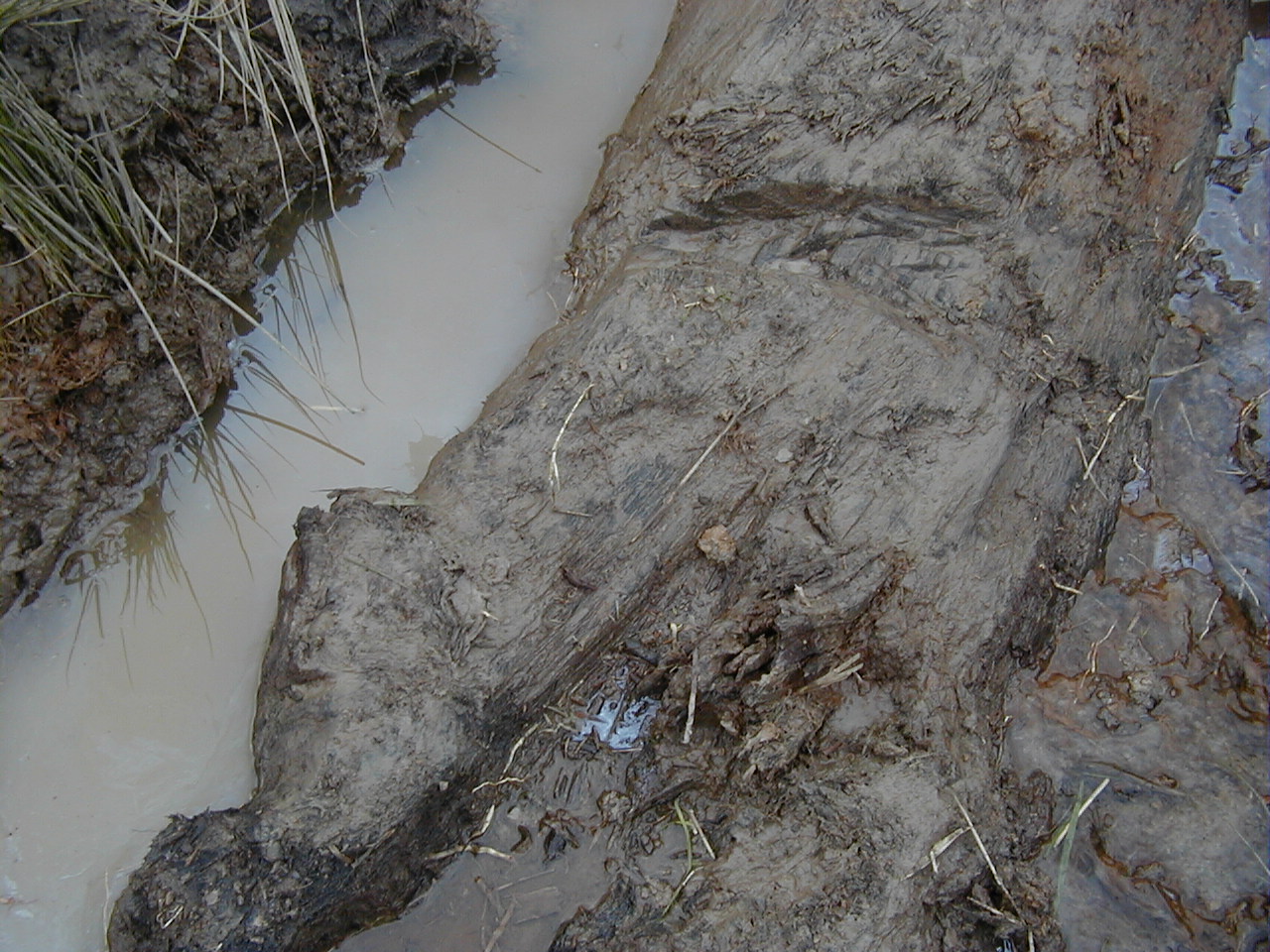 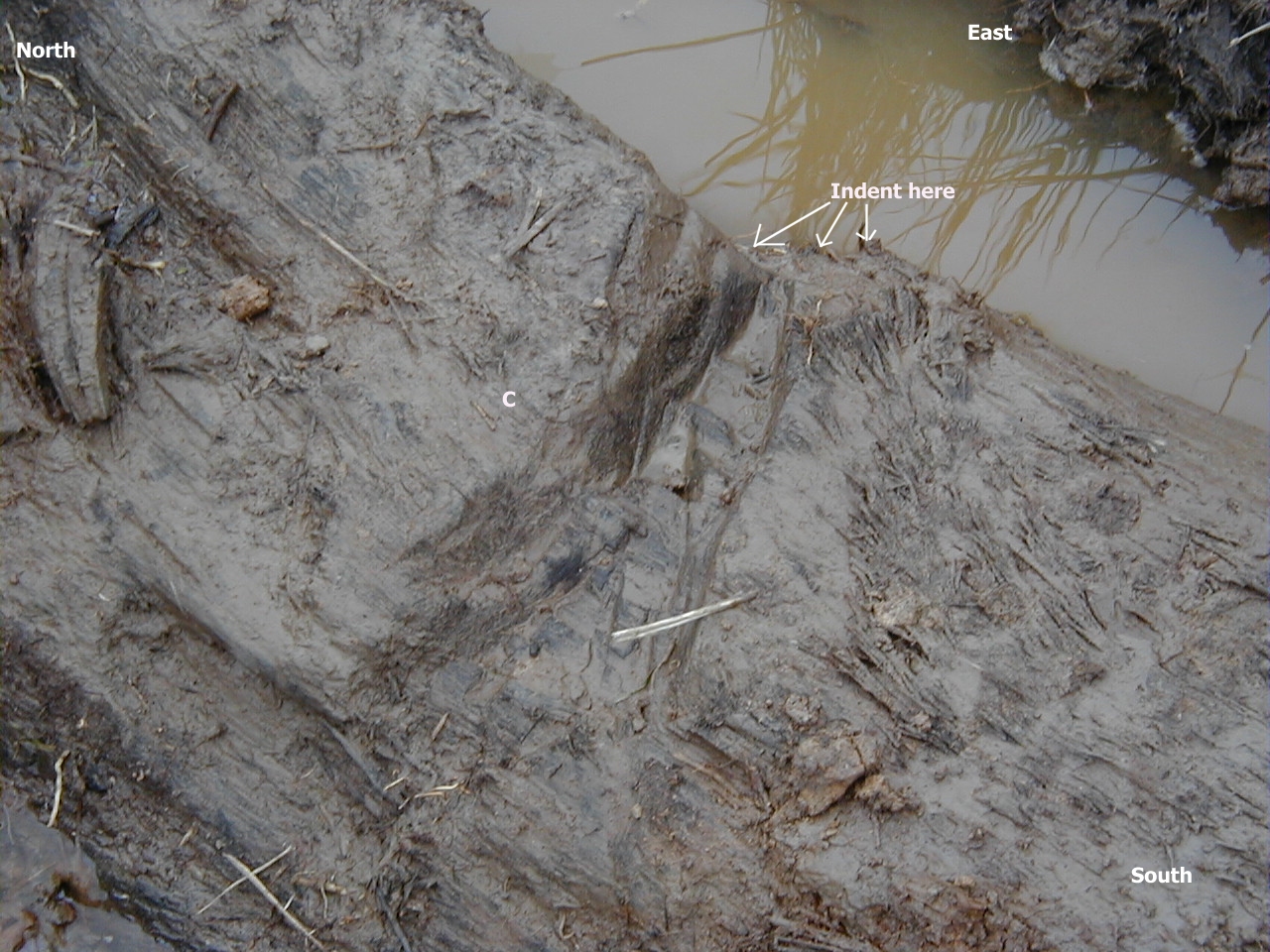