THE SIGNIFICANCE OF CHAPEL FIELD

Part Fifty-five The Hastings Area Archaeological Research Groupĺs study of Wilting (144) in 1987 concluded that ôMany aspects of the Manor of Wilting remain tantalising mysteriesö. However it does confirm:

Wilting Manor is also well documented because of its connection with Hastings Castle. The Foundation Charter of the Collegiate Church of St Mary in the Castle mentioned ĹThe Chapel of Wiltingĺ before 1100. 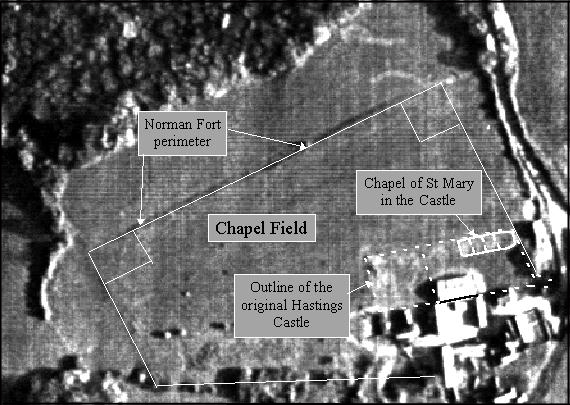 Chapel Field Wilting showing fort perimeter and possible chapel site
The reference to the Chapel of Wilting suggests to me the chapel is situated in Chapel Field. This may seem an obvious conclusion but no-one has found it despite a series of investigations by local archaeologists, including myself, who have spent most of our time looking in Chapel Wood. This is because there is absolutely no indication on the ground that there could be a chapel anywhere else. The reason it is situated there in the top field (now called Chapel Field) is that it is reported that on the night before the battle the Normans erected chapels in that field, where they camped on the night before the battle and subsequently erected a permanent chapel.(145)

William is reported to have given his pep talk in the same field on the top of the hill. If all the other elements of the story are correct it would seem most probable that after the battle a permanent chapel would be built there. The historical record goes back to approximately 1100, bringing the name of the field and the events of the Invasion almost together. I must therefore conclude that it is highly likely that the connection between Wilting and Hastings Castle, as mentioned in the HAARG report, is interconnected with the incorrect location of the castle at that time. This would mean that it could be possible that St Mary in the Castle is the actual name of the original church at Wilting, because it is known that the church was situated within the boundary of the castle in 1094.(146) If the castle was at Wilting before it was moved to the current position it must be within the original fort perimeter and would have been built after the battle. I have marked the site where I believe this to be on the previous page. This is where the aerial photos show a large building enclosure and the shape of the land indicates a building to be buried there. It also happens to be located on an east/west axis, which would be expected for a building of this kind. Close inspection also reveals some large building stones located on various points on the perimeter.

A crucial piece of evidence to support this is found in 1446 when the King (Henry VI) made a grant of jurisdiction over the church to the Bishop of Chichester. The deed of grant states:

ôa certain church of the Blessed Mary, within the Castle of Hastings, in the county of Sussex, since erected and established into a collegiate church by the former Count of Eu...ö

This can be interpreted to mean that the Count of Eu (probably not the one who fought in the battle, but his son) re-erected the castle and or the church. The words ôsince erectedö could apply to either or both buildings. Why would the bishop use the expression ôsince erectedö unless it was known at that time that the buildings had been moved.

Whilst it could not be said that these observations are themselves evidence it would explain why the manor was built on the site after the church and castle were removed. It would also explain why several huge man made sandstone blocks have been found on the Manor site, which have the appearance of weathered tombstones and why the manor house itself has a lot of sandstone construction in the lower and basement areas. It would explain the anomaly of the name of the field, with the apparent absence of any historical confirmation of a chapel and why the name goes back so far in the record. I would therefore propose that the site needs to be subject to thorough archaeological scrutiny by a fully qualified investigation team.

This clearly illustrates the difficulty in dealing with documents from the distant past since the use of the word to describe a castle can also be interpreted to mean fort. I have not sought to differentiate in any fine detail throughout this document since it is clear to me that by any other name a fort was regarded as a castle in the time scale we are interested in. This will not endear me to the critical eye of the academic fraternity, who might seek to justify the meaning of one translation as against another. I take the view that it is accepted by most historians that fort or castle meant more or less the same thing in the late Saxon era. If I have been a little lax in the use of these two words in their absolute sense I apologise in advance to my critics, but do not believe it alters the conclusions reached. Namely that Chapel Field, in the manor of Wilting, holds the ruins of one of the most exciting archaeological finds of the century, the original Norman castle at Hastings.