Part Thirty-five The best data available comes from the National Library of Air Photographs (NLAP), held by the Royal Commission on the Historical Monuments of England. These are crown copyright and go back as far as 1946 for our purposes. The quality of the earlier studies were extremely poor due to the low quality film and difficult means of obtaining them. We tend to forget that it was not so long ago that men hung out of the back of the aircraft with a box brownie to get what nowadays we take for granted. However we are very lucky to have access to such a record. This allows us to look back beyond the developments of the last forty years, which might otherwise obliterate the more difficult to see items.

Those who study this document should be aware that much of the finer detail has been lost in the transfer from original source documents into computer graphics files, available for all to read. The drop in quality is unavoidable but allows those without access to the original documents to make a reasoned judgement. Due to the importance I attach to the photographs involved I have not sent these to any of the interested parties, but make them available at my office for inspection during normal working hours. Those who have access to government offices, such as the Department of Transport, can order copies from the relevant authorities, should that be deemed necessary.

In presenting this evidence I have decided that the best approach is to study the photographs available in date order, starting with the earliest and working through to those taken last Summer. In order to achieve the best reproduction I have copied them as large as is practical, with accompanying explanatory text. All photographs are shown looking north unless stated otherwise.

The first photograph shows Sandrock Field on the left, Five Acre Field in the middle, with the deep water port area centre right. The Roman tracks can be seen running East to West as a pale line from the kinks in the boundary with the port. The Roman track from the Five Acre field headland running north is clearly visible as a dark line. This photograph should be compared with the plan in part 33.

Five Acre field, centre of the photograph, reveals what is probably the first intimations of the tell tale signs of a Saxon camp, with ditches, inner and outer wall. The central white feature is the remains of the Roman building. The Saxon element is circular in nature with the eastern side more noticeable, showing as darker lines on the print. There are also a number of poor quality circular features which indicate possible early building sites

On the right of the port (in the top right hand corner of the photograph) can be seen what may be the remains of an earlier defence in Redgeland Wood. This structure is on private land owned by British Rail. It has been fenced in for many years and until recently completely impossible to get to. The London to Hastings railway passes within 20 meters on an embankment immediately next to it, cutting the site off from the general populace since the line was electrified.

I cannot at this time establish exactly what the structure in question is. It is nearly ten feet high and covered in tightly packed stones. These appear to have been laid rather like a wall, but without any bonding material. It is oblong in shape with a depression in the middle dropping half a meter, as if the top carried a defensive fence. There are steps, or something similar rising from the front and it appears to be in a position to control access to the port from the north-east. The whole site is completely overgrown with dense briars and vegetation. 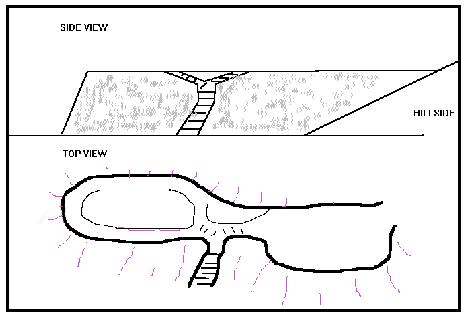 Immediately in front of this structure, running into the marsh, is an irregular raised boundary, which encloses an area of land crossed by the footpath. A large stone slab, similar to that used in the construction of Battle Abbey, marks the entrance from the south. The question as to how this stone got there immediately springs to mind. This enclosure also has an earthen raised edge and can just be seen on the aerial photographs as a dark outline with a rectangular shape in the southern corner. 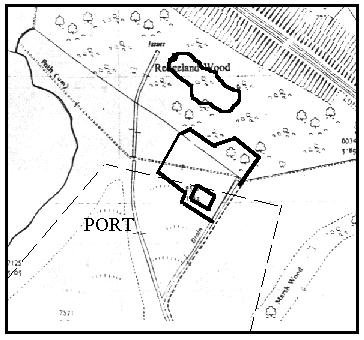 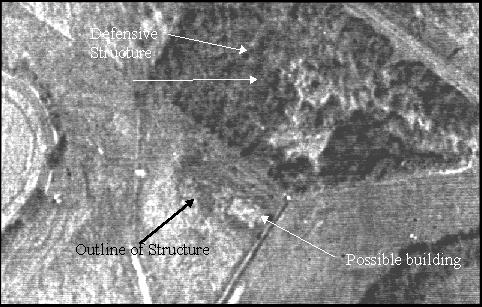 Enlargement of port area from page 105

I believe this may be the remains of an ancient building and that the structure may relate to the castle referred to in the Chronicle of Battle Abbey when it stated “The castle then stood below the cliff, on ground since overflowed by the sea”. The ground in question has undoubtedly at some stage been flooded by the sea and it is located immediately below a headland that also was a cliff many years ago.

The statement in the Chronicle has always baffled historians. Here there appears to be the potential for an answer that interfaces with all the other elements of the puzzle. Whilst I cannot say with knowledge that these items are linked to the story of the Invasion I am certain that they relate to the port and are of great antiquity. Further investigation is essential in order for others to provide the necessary explanation.