Part Thirty-three Finally I have produced a plan of the port area showing all the elements of the Roman period. These include the interconnecting tracks, the fort, the jetties or loading bays together with the sites of identifiable buildings. 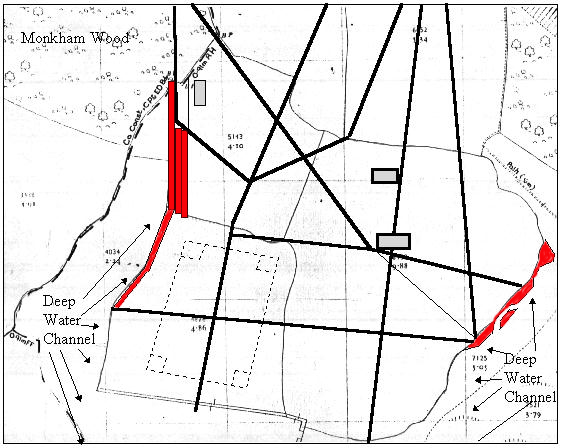 These confirm the existence of a flourishing community which had to be housed and accommodated in the immediate vicinity. As yet the exact site of this additional community has not been identified and a huge amount of work remains to be done to excavate and identify the salient features of the site as a whole.

The manor house at Wilting is situated on the top of the hill and has an immense strategic advantage by virtue of it’s control of the main track to London. The view from the top gives command over all the immediate area and would allow at least an hour’s warning of any attack if implemented on foot, as well as giving full view of the sea and shore. It is therefore highly likely that the area immediately adjacent to the manor house holds archaeological secrets worthy of investigation. Aerial photographs reinforce this conclusion and will be examined in more detail later.

The environmental and archaeological survey, conducted by the Department of Transport, relating to the Wilting site, has failed to identify specific features under the small area of land designated for the road.

Given the development of the port, the subsequent occupation by the Norman sheriffs and the strategic position that the top of the hill occupies, the manor house area needs extensive investigation, far beyond that employed to date. Without the benefit of the research contained in this document those conducting the investigations to date have been working in the dark and would not have the resources to identify remains(128) that may have no iron left in them. I do not believe there has been any reference to aerial photographs(129) of the site in question commissioned for the report, since it relies almost exclusively upon a Geophysical study of the route, which does not cover all the specific fields in question and can be discounted from a technical position in relation to the nature of any relics that may still exist.

In conclusion the geophysical study is meaningless in as far as proving or disproving the existence of a national treasure of this nature, because the samples employed are too local and too small. The report confirms this by qualifying those statements that are made. Under normal circumstances such a survey would be satisfactory in determining whether buildings existed that needed further examination. However in this case more is at stake and buildings are only part of the over all picture. The buildings that cover this site are made of wood and therefore can only be found from excavation and identification of post holes. Since this information totally undermines the validity of the Department of Transport geophysical survey, from the point of view of an archaeological investigation of relics relating to the periods concerned, no reliance can be made on them.

I believe that it can be demonstrated beyond reasonable doubt that the site in question at Wilting had a Bronze Age settlement over an extensive area within the 200 acres by virtue of the large number of flint instruments found there. It is reasonable to conclude that development of the site continued into the Iron Age and contributed to the forest clearance(130) of the valley. This then resulted in a Roman occupation of an area that became known as a port, which eventually became known as the port of Hastings, as a result of the occupation by the ancient tribe called the Hastingas.

As discussed in some depth earlier there is no evidence of a port at any other site other than Bulverhythe, that could be called the original Hastings Port. This new evidence confirms the existence of a Bronze Age and Iron Age settlement adjacent to that port, which the Romans occupied for almost a century. If this port was the same port that William landed at nearly nine hundred years later what happened in the time in between?

I believe that the settlement along the Combe Haven valley was not abandoned by the inhabitants when the Romans returned to Rome. The valley had a record of continuous development since the beginning of man’s occupation of the area. When the Romans left it was occupied by the Hastingas tribe, whether that was before, after or during the Roman occupation cannot be determined. However what is certain is the port was the centre of growth, turning from a broad based settlement along the shores of the valley into the original Hastings caestra, referred to in the ancient manuscripts.

If this assumption is correct, as I believe it is, evidence of the Saxon and Norman occupation must still exist. Unbelievable as it may appear to those connected with research of this nature, evidence can be found. This evidence is within the boundary of the original port area, thus fulfilling the requirements of The Carmen (“You restored the dismantled forts which once stood there..”.