Next follows the serving of the first meal after the erection of the wooden fort that they are reported to have bought with them. This plate shows the first fort that they built as two towers connected by a roof that could be constructed from parts of the dismantled ships. This would support Wace's claim that the ships were dismantled. It would clearly be a logical thing to do as the timbers from so many ships would form a readily accessible timber source with which to build a fort. These defences can be seen with what may be the oar ports intact, exactly as portrayed earlier (Plate 9 and Plate 10) as white holes in black timber.

Placing the foot of the tower upon the base of the Tapestry leads me to believe this site to be at the bottom of the hill described in the Chronicle of Battle Abbey and Wace's Roman de Rue. The coloured curved strips, seen behind the fort, could also indicate a hill. These strips being a diagrammatic way of showing the way that farmers sowed crops across fields to facilitate ploughing by oxen. This seems a logical explanation but does not satisfactorily explain the existence of a projection at the top of the curve. Whilst not apparent on most reproductions in print it is very obvious when viewed in person at the Bayeux gallery.

This “nipple”, as I shall call it, makes further inference to the fact that the strips may not have been meant to be interpreted as a hill but some form of roof. The fact that it matches the planking on the invasion boats may be just co-incidence. All that is certain is that the designers wished to draw this particular item to our attention.

There then follows a meal where two sets of people are dining. 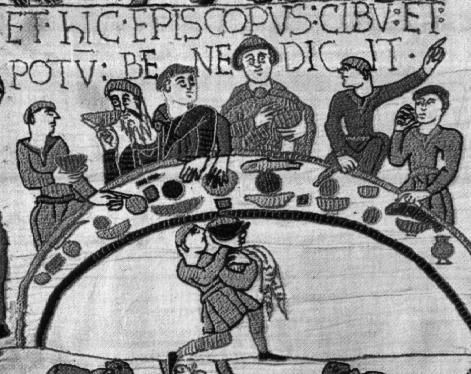 The first, on the left, are using their shields as a table raised above the normal ground level, illustrating the resourceful use of materials bought with them. The second dining scene appears to be at a similar elevation but this time in a circular room. It has been suggested that the presentation is of a circular table. I do not believe this is the case, as the artist is showing an important scene which took place on the day of the landing, confirmed by Wace's manuscript. It illustrates a number of stages of the same meal in one picture, demonstrating the skill of the originators, to save time in production and achieve the maximum impact. The fact that the table is tapered indicates that it has been specifically designed to show some form of perspective, which in turn means in my view that the room was round, rather than the table.

The man in front is a servant with hand basin and towel for hand washing. Bishop Odo is the dominant figure blessing the food. The duke sits at the right of the Bishop with one hand in a dish taking the meal. The man the other side of Odo is signalling that the meal is over and it is time to leave. There is only one implement on the table and that is a knife, the only eating implement of the age.

An important aspect of this section of the Tapestry is that the landing sequence, when seen in total, is a continuous event up to this point. Bishop Odo is shown with a fish on the table, together with fish in front of one or possibly two of the other guests. This provides almost conclusive evidence that these events took place on a Friday, when clerics abstained from meat. The 29th September was the Friday in question, the day of the landing, therefore this meal must have been taken in the Norman camp on the first day or night of the Invasion. The Saxon Chronicles, which we shall look at in the next chapter, provide very little evidence about the Invasion, other than confirming that the Normans left St Valery on the night of Thursday 28th September. This is also confirmed by the Carmen where it states

"The feast of St Michaell (73) was about to be celebrated throughout the world when God granted everything according to your desire".

The Bayeux Tapestry provides us with a unique detail that could easily be over looked. There was not enough time or tide for the invaders to have landed in the morning at Pevensey and then sailed or marched on to Hastings to arrive there on the same day as the landing (which was the Friday). The reason for showing the bishop eating fish, whilst the other men ate provisions, was to confirm the bishop's position as spiritual leader. In many respects the picture in the tapestry takes on the spiritual aspirations of the last supper, with Bishop Odo occupying the leading roll. The meal was a significant event since Wace reports the same supper. It was known to everyone, at the time, that this took place on the day of the landing and this was a Friday. Hence the requirement for a fish at the table of the bishop. The consequence of this analysis is that contrary to previous historical thinking the Bayeux Tapestry provides further unexpected and incontrovertible proof by virtue of the logistics of the day that Hastings was the landing site.